“The Secret to Aging Well? Contentment” – Some Reflections

What allows folks to age well, even when struggling with physical challenges? Goldfarb’s answer: “If there is one characteristic common to friends who are aging with a graceful acceptance of life’s assaults, it is contentment.”

“The Secret to Aging Well? Contentment” – Some Reflections 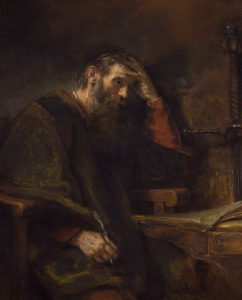 Recently an article from the New York Times dropped into my inbox. I don’t know what bit of digital magic sent it to me. But if figure some AI widget out there has a good idea how old I am. The article’s title, which did indeed intrigue me, was “The Secret to Aging Well? Contentment.”

Now, I’ll freely admit that I would like to age well. So this article has personal implications, for sure. But, in my work for Fuller’s Max De Pree Center for Leadership, I am also increasingly interested in helping people flourish in what we call the “third third” of life. In the language of Robert W. Goldfarb, author of the Times piece, we want to help people age well.

Goldfarb, who was 88 years old when he wrote “The Secret to Aging Well,” shares just how eager he has been to be in excellent physical condition in order to prolong and enrich his life. He continues to run competitively and work out consistently.

Yet, Goldfarb now realizes that his effort to maintain excellent physical condition, however important, is not enough. He writes, “Despite having many friends in their 70s, 80s and 90s, I’ve been far too slow to realize that how we respond to aging is a choice made in the mind, not in the gym.” He compares two sorts of friends:

Some of my healthiest friends carry themselves as victims abused by time. They see life as a parade of disappointments: aches and ailments, confusing technology, children who don’t visit, hurried doctors.

Other friends, many whose aching knees and hips are the least of their physical problems, find comfort in their ability to accept old age as just another stage of life to deal with. I would use the word “heroic” to describe the way they cope with aging as it drains strength from their minds and bodies, though they would quickly dismiss such a term as overstatement.

What allows folks to age well, even when struggling with physical challenges? Goldfarb’s answer: “If there is one characteristic common to friends who are aging with a graceful acceptance of life’s assaults, it is contentment.”

How to achieve contentment? Goldfarb sought to experiment with small steps: “[R]ather than overhauling my life completely in the hopes of undertaking a fundamental change in the way I confronted aging, I felt the place to begin would be to start small, adopting a new approach to situations I encountered every day.” If, for example, he was having lunch with a friend not far away from an annoying leaf blower, he would focus on the conversation and the joy of being with a friend rather than obsessing about the obnoxious noise in the background. He ends his article on this note: “But now the challenge was to find that contentment within me. Hoping that contentment will guide me as I make my way along the path yet to be traveled.”

Goldfarb certainly has a point about contentment. According to the dictionary, contentment has to do with being satisfied or happy with one’s life. Surely, if we could be content even when things in life are hard, even when our bodies age or our friends die, this attitude would help us to age well. But genuine contentment is, at least for me, not easily found. I find myself naturally drawn to William Shakespeare’s line in Richard III, “Now is the winter of our discontent.”

So, for those of us for whom contentment does not come easily, what might help us to grow in life satisfaction as we live through the third third of our lives? I have a few thoughts to share. I expect more will follow later on.

First, I think Goldfarb is on to something when he focuses on small adjustments rather than major lifestyle or attitude changes. I believe contentment can be the result of a discipline of attentiveness. If I pay attention to the good things in life, even in times that aren’t perfect, my contentment will grow.

Ironically, Goldfarb does not mention one of the demonstrated paths to such momentary contentment: gratitude. There is ample psychological literature that shows how the expression of gratitude can transform our experience of living. (See, for example, “How Gratitude Changes You and Your Brain,” by Joel Wong and Joshua Brown, who are professors of psychology at Indiana University.) So, if you’re having a conversation with a friend with annoying background noise, the more you can feel grateful for your friend and your relationship, for the chance to talk, for your history together, etc., the more you’ll be able to feel content.

The search for contentment is not new. You can find lots in the Bible about being content (or not). For example, Proverbs 19:23 reads, “The fear of the LORD leads to life; then one rests content, untouched by trouble.” Perhaps even more relevant to Goldfarb’s desire for contentment in challenging times is the Apostle Paul’s admission in his letter to the Philippians, “I am not saying this because I am in need, for I have learned to be content whatever the circumstances. I know what it is to be in need, and I know what it is to have plenty. I have learned the secret of being content in any and every situation, whether well fed or hungry, whether living in plenty or in want” (Phil 4:11-12) If Paul were writing for the Times, he might say, “I have learned to be content in every season of life, whether young or old, whether healthy or sick, whether strong or weak.”

What is the secret of Paul’s contentment? The Greek word translated as “content” is autarkēs, which is found only here in the New Testament. Literally meaning “self-sufficient,” autarkēs was valued by secular Hellenistic philosophers, especially the Stoics. As Lynn Cohick observes, “The Stoics held that contentment or self-sufficiency was achieved as the individual became indifferent to his/her surroundings.”[1]

Yet, though Paul shares language with the Stoics, it would be wrong to think of Paul as claiming to be sufficient in himself. The next verse in Philippians makes his true meaning clear: “I can do all this through him who gives me strength” (Phil 4:13). Paul is able to be content in all circumstances, both the good and the bad, through Christ. As Cohick explains, “Paul seeks not self-sufficiency, but Christ-sufficiency. Contentment is living in Christ, the sure hope (1: 19– 20), the unfailing promise (2: 9– 11), the Savior who will come again (3: 20– 21). Such contentment leads not to indifference but to service; not to detachment but to active engagement with the world.”[2]

It’s easy to say our contentment needs to be in Christ. It’s much hard to learn to experience this reality, especially in times of loss, loneliness, and suffering. Yet, it is often in these times that we realize most profoundly that our self-reliance isn’t work, that we much rely on the only One who is fully reliable. In Christ, we can grow to become content in all things. I expect this is a deeper secret to aging well.

The Secret of the Missing Comma When someone we love dies, we grieve. That’s part of being fully and freely human.…
Life in Lockdown: Some Examples of Creative and Critical Use… Chris is a pastor, a relational person who enjoys being personally involved with his congregants.…
Some Days We pray and long for Jesus’s final coming, and our final gathering around that great…
Retirement in the Bible? Some New Thoughts and… If you Google on “retirement” and “Bible,” you’ll find some folks who say “There is…